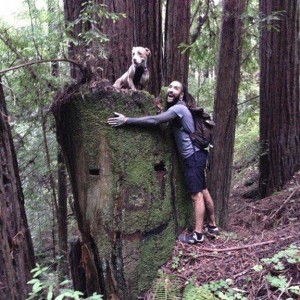 Mateo. Born to a family of Appalachian mountain people, he spent his early years living in a ramshackle lean-to without power (which is why he sucked and continues to suck at video games)

Life started looking up for Mateo when he was scouted to be a hat model at the tender young age of fifteen. He spent an extensive amount of time and energy on his career, and grew into a life as the most sought after hat model worldwide.

But alas — While Mateo was asleep, a vengeful roommate/hairstylist did his long luscious locks up in dreads, effectively ending his career.

Mateo was devastated, and began to pursue piercing — Landing an apprenticeship shortly thereafter. He worked mining coal to keep himself alive through his years as an apprentice. During his long shifts in the mines, he spent his free time carving loose stones with nothing but sheets of 80 grit sandpaper.

Today, he’s one of the owners of Way Body Arts in Santa Cruz, California, and is sole craftsman behind The Stone Demuhn – Specializing in custom stone body jewelry.