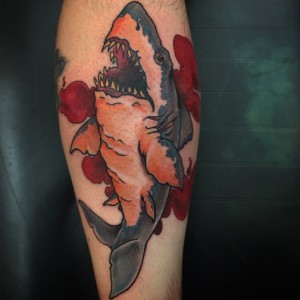 Hello! My name is Ryan Keplinger. I have received my Bachelor’s degree in Fine Arts from Purdue University. My concentration was painting and illustration with a minor in graphic design. I love everything artistic and tattooing has become the art form I obsess over since 2008. I started tattooing in a shop in Lafayette, IN called Operation Ink, which is where I currently call home.

In 2007, I was diagnosed with Hodgkin’s Lymphoma, a type of cancer in the lymph nodes. So once I was in recession, I got my first tattoo to commemorate my appreciation for the second chance. Ever since, I’ve wanted to give other people that sense of happiness I had when I got my first tattoo. It was a life changing experience, since it opened up my future in the art world.

I’m still finding my way in terms of style but I would say most everything I do is heavily Asian influenced. I really enjoy the idea of “contrast” in pieces. Not only in aesthetics but also moods and different emotions a piece of art can convey.